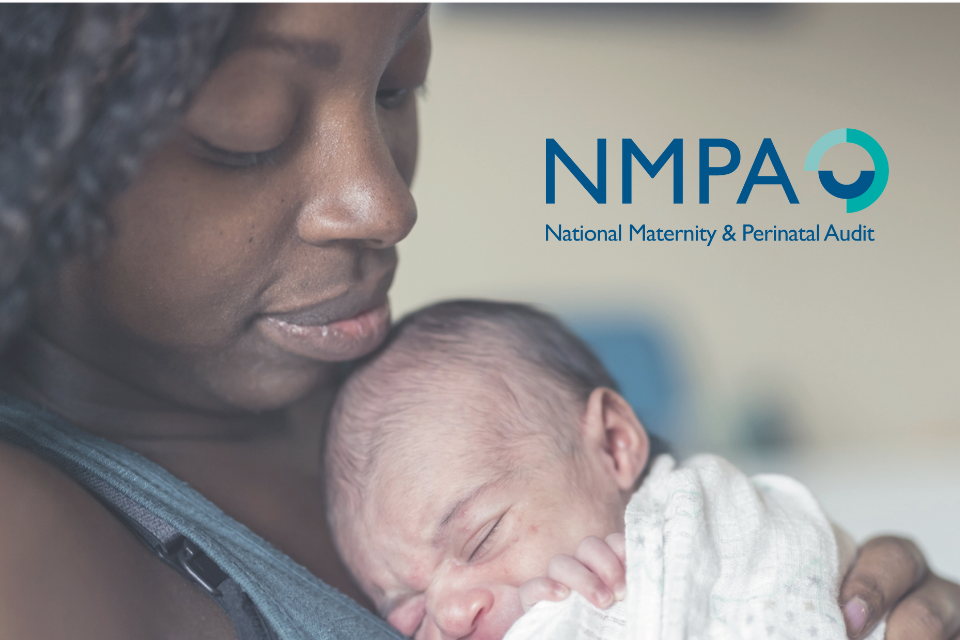 The effects of the COVID-19 pandemic on many walks of life are slowly coming into the public domain. In this article Kirstin Webster, ANNP and NMPA Neonatal Clinical Fellow, describes the role of the National Maternity and Perinatal Audit, presenting results from research using the audit’s data on births during the major period of the pandemic, and their recent audit report of the effects of ethnicity and socio-economic deprivation on maternity and perinatal care. She points to inequalities within outcomes and joins the call to investigate the causes.

The National Maternity and Perinatal Audit: inequalities through COVID-19

The National Maternity and Perinatal Audit (NMPA) is a large-scale audit of NHS maternity services with an aim to evaluate a range of processes and outcomes in order to identify good practice and areas for improvement. The NMPA is commissioned by the Healthcare Quality Improvement Partnership (HQIP) as part of the National Clinical Audit and Patient Outcomes Programme (NCAPOP). More information can be found on our website and a summary of the work of the NMPA is explained in this video.

Audit outputs include data for women and birthing people, and their babies, across England and Wales (Scotland are currently not included in the audit but have been in the past). Data are collected from each trust and board in England and Wales, with the records of over 550,000 women and their babies included each year. Alongside the annual clinical reports, the NMPA has published two organisational surveys and we produce research papers and ‘sprint audits’ on specific topics such as, maternal admissions to intensive care, multiple births, maternity care for women with a body mass index (BMI) of 30kg/m2 or above and maternal mental health. We are working on adding rapid quarterly reporting of a selection of measures to our website to provide more timely data, more information on this will be available on the website and in our newsletter soon.

Healthcare professionals working in maternity, obstetric and neonatal care can use the results and reports published by the NMPA to explore their local data and make comparisons with not only other units of an equivalent size or demographic but also national averages. Whilst these results in isolation cannot inform individual women and birthing people about the experience of the care they might receive from a particular hospital, they can be used alongside resources such as the NHS’s Friends and Family Test and the Care Quality Commission (CQC), who publish information about specific trust and board sites. When used in conjunction, these resources may inform how women engage with local services, advocate for themselves, and make choices about how and, for some, where they choose to access maternity services.

The NMPA’s reports, publications and website content are enriched with input from our Clinical Reference Group (CRG), Women and Families Involvement Group (WFIG) and service user representation for individual topics (links to lay summaries produced to complement our sprint audits can be found on the NMPA website). We are in the process of coproducing an online resource for women, birthing people and their families called the Family Gateway.  This resource will provide accessible content relating to the work of the NMPA, useful signposting to other sources of verified information and a way of ensuring NMPA results are easy to use as a means of facilitating discussions with healthcare professionals.

Recent NMPA research publications have focussed on the effects of the COVID-19 pandemic in England, for women with confirmed Sars-CoV-2 infection at the time of birth and the wider effect of the pandemic on obstetric interventions and pregnancy outcomes.

Since the COVID-19 pandemic began, sending the UK into lockdown in March 2020, pregnant women have not only been vulnerable to SARS-CoV-2 infection itself, but also the consequences of the disruption to daily life that came with fluctuating lockdown restrictions and disruption to healthcare services. All areas of healthcare saw greater use of remote consultation, utilising telephone and video calling technology and widespread alterations to visiting policies for families and loved ones. For maternity services this meant restrictions for support partner presence not only at antenatal appointments, but also before and after birth, and a reduction in the provision of out-of-hospital care and births.

Ethnic minority groups and those living in deprived areas were disproportionately affected by the COVID-19 pandemic, with higher rates of mortality and morbidity reported by Public Health England (PHE) (PHE has since been replaced by UK Health Security Agency and Office for Health Improvement and Disparities) and the Intensive Care National Audit and Research Centre (ICNARC). Whilst pregnant women are thought not to be at an increased risk of becoming infected with SARS-CoV-2, those who become infected may experience more severe symptoms. The UK Obstetric Surveillance system (UKOSS) found the rates of pregnant women admitted to hospital with SARS-CoV-2 infection were disproportionately high in women from ethnic minority groups.  The Royal College of Midwives (RCM) Coronavirus hub provides information and advice for maternity staff and pregnant women on COVID-19 infection in pregnancy, experiencing pregnancy and childbirth during the pandemic, and vaccination safety in pregnancy and breastfeeding.

Inequalities in all areas of healthcare have been highlighted by reports such as Fair Society, Healthy Lives (The Marmot Review), Health Equity in England: The Marmot Review 10 Years On and the House of Commons Joint Committee on Human Rights Black People, Racism and Human Rights.

Pregnancy continues to be very safe in the UK, but inequalities in care and outcomes remain. MBRRACE-UK publish annual reports of the Maternal, Newborn and Infant Clinical Outcome Review Programme (MNI-CORP), including surveillance and confidential enquiry of all women who die during or up to one year after pregnancy and surveillance of all late fetal deaths, stillbirths and neonatal deaths.  MBRRACE-UK have reported the disparity in maternal and perinatal mortality and morbidity, with rates being higher for women from ethnic minority groups and their babies than white women. The Five X More campaign was founded to raise awareness of and aim to reduce this disparity.

With access to maternity and neonatal data sources, detailed in our technical specification, we were able to report on ethnic and socioeconomic inequalities in maternity and perinatal care by presenting our audit measures according to the mother’s ethnic group and Index of Multiple Deprivation (IMD) quintile. In November 2021, we published our sprint audit Ethnic and Socio-economic Inequalities in NHS Maternity and Perinatal Care for Women and their Babies: Assessing care using data from births between 1 April 2015 and 31 March 2018 across England, Scotland and Wales, and accompanying lay summary. 1.37 million women and birthing people in Great Britain, and their babies, were included. The results showed rates of caesarean birth (emergency, planned and both combined) and postpartum haemorrhage (PPH) ≥1500 ml were higher for Black women when compared to white women. Women in the least deprived areas had the highest rates of PPH ≥1500 ml, a decreasing trend in rates was observed across deprivation quintiles from least to most deprived. Babies born to Black women had higher rates of having an Apgar score of less than 7 at 5 mins and higher rates of term neonatal unit admission when compared to babies born to women from all other ethnic groups. South Asian babies had lower rates of an Apgar less than 7 at 5 minutes but higher rates of term neonatal unit admission when compared to white babies. Our results showed rates of a having a Body Mass Index (BMI) of 30kg/m2 or above and of pre-existing hypertension were higher for women from Black ethnic groups when compared to women from all other ethnic groups; rates were also higher for women from the most deprived areas. Rates of pre-existing diabetes were higher for South Asian and Black women when compared to women from white and Other (Chinese and ‘other stated’ combined) groups. Rates of smoking at birth were significantly higher in women living in the most deprived quintile when compared to those in the least deprived quintile, and in women from white ethnic groups. Concerningly, we found missing data for both ethnicity and IMD. Ethnicity data were missing for 1 in 10 women across Great Britain (1 in 5 in Scotland); and IMD data were missing for 6% of women across Great Britain. Missing or inaccurately recorded data about a person’s ethnic group or IMD may mean they miss out on specific information and targeted care, and this may impact their outcomes.

By using data for over one million women in a research paper published in the Lancet, we calculated attributable fractions for the entire cohort, and specific groups compared with the least deprived IMD quintile or white women. We identified that ethnic and socio-economic inequalities may be responsible for a substantial proportion of stillbirths, preterm births and fetal growth restricted births in England. We found the largest inequalities existed for Black and South Asian women in the most socio-economically deprived quintile.

Other research publications using NMPA data have found disparities in outcomes by ethnic group. Black women were twice as likely as white women to require admission to intensive care during or after pregnancy. Women from ethnic minority groups had an increased risk of experiencing a PPH ≥1500 ml, with the greatest increase seen in Black women. In both these cohorts the differences we observed remained after characteristics of the mother, the baby, the care received, and other lifestyle, health and pregnancy factors were taken into account.

Further quantitative research is required to analyse and report on the mediating factors and causal pathways, taking into consideration specific risk factors and the wider determinants of health; along with qualitative research to explore the experiences of those accessing healthcare. We would like to see all women and birthing people offered the opportunity to choose their ethnic group from the most up to date data categories available; and for NHS Trusts and Boards to review the diversity of their local population in order to adapt their services accordingly.

The NMPA join those calling for investigation into the underlying cause of these disparities. Birthrights is convening a national inquiry into racial injustice in maternity care and the Royal College of Obstetricians & Gynaecologists have launched a Race Equality Taskforce to tackle racial disparities and racism in women’s healthcare and within the obstetric and gynaecology workforce. Five X More have joined forces with, amongst others, Members of Parliament Diane Abbott and Bell Ribero-Addy to bring the subject of ethnic inequalities in maternity care to the attention of Parliament.

The RCM’s position statement Supporting midwives to address the needs of women experiencing severe and multiple disadvantage and podcast Supporting women with severe and multiple disadvantage during pregnancy, reinforce the requirement for midwives to be supported and properly equipped to so they may adequately support the women in their care. In response to the publication of the MBRRACE-UK report and our sprint audit on ethnic and socio-economic inequalities, the RCM made five commitments to ensure reducing inequity in maternity care is key throughout their resources.

Sir Michael Marmot stated in Fair Society, Healthy Lives (The Marmot Review) and Health Equity in England: The Marmot Review 10 Years On that every child must be given the best start in life and that action to reduce health inequalities must begin before birth. A life course approach to addressing the social determinants of health for the entire population through the generations is required to target reducing inequalities and improving outcomes.

Many agencies have produced reports and guidance to support the aim of reducing inequalities in maternity and perinatal care, this list is not exhaustive but can provide further reading; the NHS Long Term Plan, Saving Babies Lives Care Bundle version 2, NHS Equity and Equality: Guidance for local maternity systems, Better Births, Maternity Action and their Mothers’ Voices report, UNICEF-UK Baby Friendly Initiative and the World Health Organisation. The NMPA are committed to continued research into maternity and perinatal care, reporting on inequalities and making recommendations to improve services for those who access them.

THANK YOU FOR PUTTING UP A PROGRAMME SO SO GOOD. EDUCATIVE , ENCOURAGING AND INNOVAYIVE.
BRAVOOOO