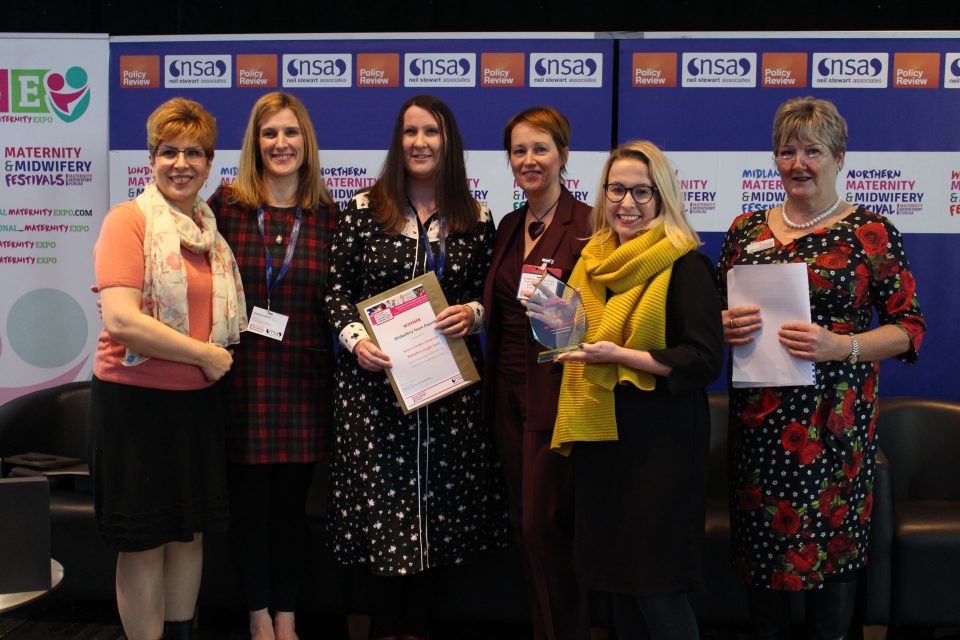 Midwives from around Scotland were honored at the inaugural Scotland Maternity & Midwifery Festival Awards last week.

Discussing the awards Sue said “This is the second Scotland Maternity and Midwifery Festival we have hosted, and I was delighted to be part of awarding these very special Maternity & Midwifery Forum Awards. This is a way of recognising the talent, motivation and excellence of midwives and maternity team involved in Scottish Maternity Services.

The standard of submissions was fantastic, so the Festival judges had to work hard to select the winners. The commended submissions and winners included a midwife working on one of the Islands to provide maternity care, a visionary and supportive midwife manager, a creative and ‘insightful’ midwifery education team and a innovative individual midwife.”

The MMF Scotland Team Award was won by the RGU Midwifery Insight Team for the development of a Midwifery Insight careers event which can be duplicated and was the first of its kind in the North of Scotland, an area which suffers from some of the highest midwifery vacancy rates in the country. Highly commended in this category were the PPIUC Team, NHS Lothian who are among the first in the UK to offer the option of Intra-Uterine Contraception insertion immediately after childbirth, known as PPIUC.

The MMF Scotland Innovation Award was won by Specialist Midwife, Shona McCann for her work in perinatal mental health, which included helping women from the North of Scotland to share their experiences, supporting them in travelling to events, contributing to local teaching events and the North of Scotland Regional Perinatal Mental Health Network and encouraging other midwives and health visitors to take an interest in perinatal mental health issues. Highly commended in this category was Noreen Dunnachie, Senior Charge Midwife, Maternity Day Care, Ayrshire Maternity Unit for service re-design for women diagnosed with Gestational Diabetes Mellitus (GDM).

The MMF Scotland Achievement Award was won by Maureen McSherry, Consultant Midwife, Wishaw General Hospital for her work facilitating a clinic for women who have had a previous traumatic birth and for helping them towards a better experience the next time. Highly Commended in this category was Veronica Gordon, Community Midwife, Isle of Barra – Barra Medical Practice, who being the sole midwife on the island, holds a tremendous amount of responsibility on her shoulders.

The MMF Management Award was won by Jane Raitt, Chief Midwife (Interim), NHS Grampian. Jane has been in this post since October last year but was recognised for the leadership that she has shown not only in this role but in her previous role as an inpatient Midwifery Manager. Jane has been a midwife for over 20 years and has worked not only in NHS Grampian but also held midwifery positions in England. Since Jane joined NHS Grampian she has led innovative and positive improvements in the maternity service and has encouraged other midwives to share their ideas and supported and encouraged them to improve the quality of care in this large rural area.

In 2019 our Maternity & Midwifery Festivals will hit the road once again with award ceremonies taking place in London, Leicester, Leeds, Cardiff and Edinburgh – we hope to see you there!