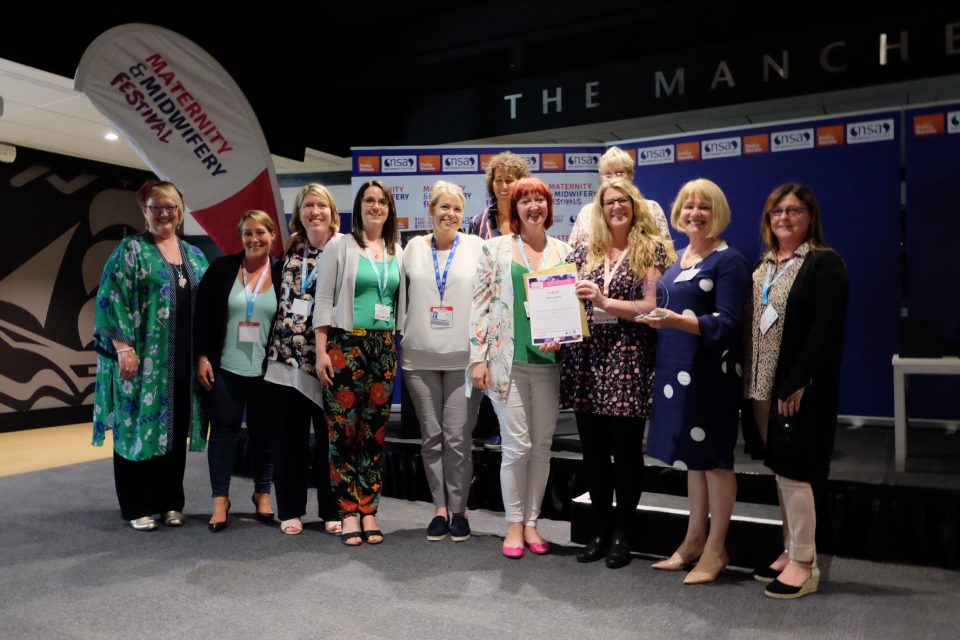 Midwives from across the North of England were recently honoured at the second annual Northern Maternity & Midwifery Festival Awards.

The Festival was attended by more than 400 midwives, doulas and healthcare professionals with many hundreds more watching the live stream of the event online with viewing parties taking place throughout the country.

The Northern MMF Achievement Award recognises an individual for a lifetime of service and impact who has made a difference and inspired others. The achievement award was won by Cath Holland, Bank Midwife, Helme Chase maternity unit at Westmorland General Hospital, Cumbria who has demonstrated great care and compassion, acting as a true advocate for women suffering FGM and has gone the extra mile (thousands of miles in fact) to help eradicate this dreadful practice. Cath has raised funds to bring Kenyan midwives to the UK to speak with FGM campaigners, who have gone on to set up the community based organisation Kepsteno Rotwoo Tipin – Abandon the knife for girls. In 2010 Cath founded the UK based charity Beyond FGM to work in partnership with this group.

There were two Highly commended nominees in this category with both Jonathan Cliffe, Midwife at Warrington and Halton Hospitals Trust and Jenny Clarke AKA Jenny the Midwife recognised for their outstanding contributions to maternity services.

The Northern MMF Innovation Award recognises an innovation, service or clinical research in a midwifery or maternity setting. The innovation award was won by Ingleside Birth and Community Centre for its transformational approach and implementation of the findings of Better Births within Greater Manchester. Ingleside is a state of the art birth and community centre, which offers a one stop shop for services that wraps around the needs of the local families. The innovative team underpins its success with extensive, collaborative partnerships with women and their families, the highly committed BFT team and extensive multi agencies. Since opening in April 2018 Ingleside has already redesigned its pathway and integrated health services.

Highly commended in this category were the Clinical skills team at the University of Middlesex for developing a core team of expert Homebirth Midwives, leading to home birth rate increase of 41.3%.

The Northern Maternity & Midwifery Festival Management Award recognises an individual who has played a regional, professional or national role above and beyond their day job. The management award was won by Cathy Atherton, Former Head of Midwifery, Lancashire Teaching Hospitals NHS Foundation Trust. Recently retired Head of Midwifery Cathy Atherton has worked tirelessly in the NHS for 42 years. Cathy has been fully committed to better births for all and improved maternity services, and has made transformations and service delivery changes happen, through working with wide multidisciplinary teams. Cathy has led introductions of many new processes and patterns for better outcomes. She has been such an inspirational midwife and leader, that her legacy will live on for many years through all the staff, mothers, fathers and families whose lives have been touched.

Highly Commended in this category was the Maternity Management Team at Warrington and Halton Hospitals Trust. The team led by Dr Tracey Cooper MBE, have turned their service around in the last two years to create a truly woman and family centered service.

The Northern Maternity & Midwifery Festival Student and Newly Qualified Midwife Award recognises an individual student midwife or newly qualified midwife for their contribution or achievement in midwifery or maternity practice while in training. The Student and NQM award was won by Melissa Connelly, Student Midwife at the Royal Bolton Hospital. Melissa, a second year Midwifery student at the University of Salford, is extremely passionate about the profession. She has actively documented her journey into midwifery via her social media accounts and blog and has received messages from individuals who contact her to say that she inspired them to follow their dream and study midwifery, too. She has recently self-published ‘The Midwifery Personal Statement Guide’.

Highly commended in this category was Debra Heys, Student Midwife, University of Central Lancashire who has excelled in both her academic and clinical work as a student midwife. Debra worked as an infant feeding peer supporter at a local maternity hospital before entry, and her course leaders are delighted to see the impact she has had on the women and families in her care but also for her colleagues and peers on the course.

The hotly contested Northern Maternity & Midwifery Festival Team Award recognised midwifery teams who have demonstrated innovation, excellent inter-professional working and who have transformed services. The Team Award was won by Lancashire Teaching Hospitals Maternity Service led by Former Head of Midwifery Cathy Atherton who displays exemplary leadership which enables the whole multidisciplinary team to innovate and deliver high quality care. The team’s achievements are numerous and have led to them being awarded Beacon Status (one of 3 Trusts nationally) for their midwifery led services in July 2018, by the Midwifery Unit Network.

Two nominees were Highly commended in this category. Ingleside Birth & Community Centre Team were recognised for setting up a freestanding birth centre and community hub an outstanding achievement in a short time frame. Blackpool, Wyre & Fylde Miscarriage Support Group were commended for providing (free of charge) support to families within the community. The team is run by volunteers who offer face to face support groups, telephone contact daily and email support.

“The annual Northern Maternity and Midwifery Festival Awards recognise the talent, motivation and excellence of midwives and maternity teams involved in the provision of maternity care in the North of England. I was delighted to play a part in these very special awards.

The standard of submissions was very high, so the Festival judges had to work hard to select the winners. Midwives are always busy providing care to mothers, babies and their families, so rarely shout about what they do, and so it is great to be able to highlight the fantastic work of those who were nominated by colleagues, and celebrate all that is the best in UK midwifery and maternity services. The breadth of those nominated reflect the diverse roles midwives hold, in education, research, management and clinical practice, and the impact they have in ensuring, safe, compassionate and tailored care to women and their babies.

All those who were nominated – whether shortlisted, commended or award-winning – showed huge commitment, innovation and drive in improving care for women and babies, and for supporting their colleagues within the service.”

Throughout 2019 our Maternity & Midwifery Festivals will be on the road with award ceremonies still to take place in both Cardiff and Edinburgh – we hope to see you there!