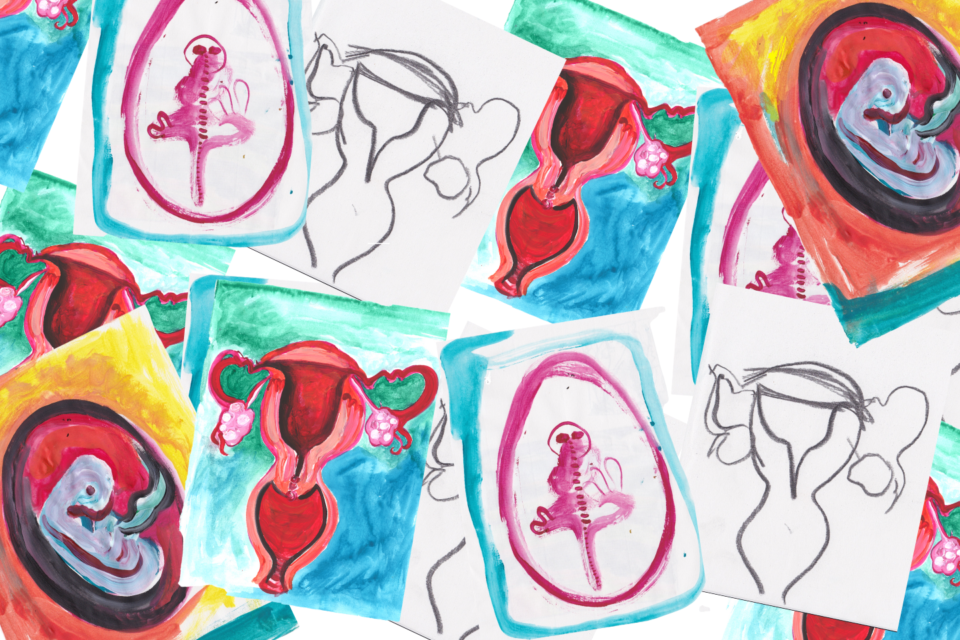 Last week a leaked report indicated the US courts may overturn the right to have an abortion. In the article below Laura Godfrey-Isaacs, artist & midwife, reflects on this decision and on the importance of her uterus.

A recent report on the possible abandonment of the landmark Roe v Wade decision by the American Supreme Court in 1973, that enshrines the right to abortion in the USA constitution, has caused me to reflect on my uterus; what it’s gone through, and who has an interest in it.

The uterus is a miraculous organ that can grow up to 1000 times bigger during pregnancy. Mine undoubtedly did in order to sustain a difficult fourth pregnancy and was damaged and scarred in the process – my daughter, who has most interest in this, survived in large part due to my uterus’s ability to sustain her. It’s repeatedly built up and shed its lining for forty years through the process of menstruation – of little interest to anyone, I suspect, given the shame and humiliation around periods. Plus, it’s been subject to a succession of procedures; smears, biopsies and insertion of contraceptive devices – probably only of interest to anyone that I’ve had sex with. Later in life, I’ve developed a condition called adenomyosis, that creates thickening and blemishes in the uterine wall (possibly exacerbated by those repeated procedures) which causes heavy bleeding and pain. Given the lack of research into women’s reproductive disease, therefore, of scant interest even to the medical profession. Significantly, it’s also been scored by loss – two pregnancies I wanted, that didn’t progress. I coped with them at home, and kept quiet about it, as few people want to know the harsh reality that 1:4 pregnancies end this way, and there is little medical provision offered. Other times I’ve forgotten to use contraception, or it failed, so I’ve used the morning after pill and been relieved when my womb has been made to shed its bloody lining to pre-empt an unwanted pregnancy. And at one time I was preparing, and had booked an appointment to terminate a pregnancy, in New York, aged 24 years old, before I lost the pregnancy through miscarriage.

The last episodes are the ones that seem to spark the most interest from others, which is probably why I’ve also kept them under wraps, until now, to avoid judgement.

This kind of history; a litany of woeful but also joyful experiences, involving a woman’s uterus and her blood, is common though many of us are undergoing them invisibly, under the radar. They are usually ignored, seen as taboo, shameful, and generally of private concern – except for the very public sanctions and laws around emergency contraception and abortion.

My interest, however, as a cis woman, a feminist and a midwife, is with all of it. I’ve got used to being intimately concerned with my own and other people’s uteruses and blood; as a midwife and a mother to two female bodied people. I mostly see blood now, having gone through the menopause, during or after other people’s births; a miraculous fluid that so often signals a beginning or end to something. I regularly counsel women and people who birth who are bleeding and think they are starting to miscarry. Conversely, I have conversations with people who are uncertain whether to continue with a pregnancy. I hear the terror and distress in their voices, at both situations, and the last thing they need is outside judgement, censure and barriers to care.

Personally, preventing pregnancy and waiting desperately for my period to start has been a constant feature of my life. Fortunately, we have access to free contraception in the UK, but that doesn’t mean its devoid of issues. I was ‘put on’ the pill aged 16yrs by my mother who feared I was promiscuous and would inevitably get pregnant (I wasn’t and didn’t). By my early 20’s I had rejected this and used barrier methods of contraception such as the cap and condoms, unhappy with using hormone treatments and scared by the Aids epidemic. Later, after giving birth, I used the mirena coil: inserted into my womb without any pain relief, using an uncomfortable metal speculum, after which I bled. This unpleasantly cold, hard and unforgiving instrument is largely unchanged from its original design, created by James Marion Sims in the mid 19th century – the controversial and now discredited ‘father of gynaecology’ who in dangerous, exploitative and deeply unethical ways bought, sold and experimented on enslaved women, reputedly without any form of pain relief. A recent statue of him was removed from Central Park in New York in 2018. Thankfully, this piece of equipment is now finally being rethought by women designers.

When I thought I was pregnant whilst studying in New York and conducting a long distance relationship with my now husband, we decided it wasn’t the right time to start a family. After a positive pregnancy test we agonised over the decision but decided, together, and I booked myself into a clinic in New York for a termination. I was spared the procedure with a miscarriage before the appointment. However, it wasn’t lost on me that even then, in 1990, the issues of abortion were hotly debated in the USA, and there were protestors outside the clinics. I was also going to have to pay a lot in America for a termination, whereas in the UK I could have the procedure safely for free, and not be harassed for doing so. Since then, back in England, I’ve accompanied many friends to have abortions, fed them comforting food after and supported them with their decisions – which are never easy.

I would probably still have access to this service if I was living in America now, whatever the outcome of the Supreme Court – my privilege would ensure it. However, a ban on abortion, which now seems likely in many states, would inevitably hit the most vulnerable and leave people at risk of unlicensed and unscrupulous procedures, as well as the prospect of going through enforced pregnancies. Artist Paula Rego has created some of the most stark and powerful images on a right to a safe termination of pregnancy. Her pastel works ‘Abortion Series’ 1998, were made following the unsuccessful referendum to legalise the practice in Portugal. They depict the brutal truth of experiencing unsafe, dangerous abortions without the assistance of medical care. Her works have been credited with swaying public opinion and for the successful result, when restaged in 2007. Pity, then that these kind of images are more often drowned out by the infamous images of foetuses in the womb from ‘Handbook on Abortion’ by John Willke, 1971, seen as highly influential in the pro-life movement that sprung up around it.

This worrying claw back of reproductive rights around the world is paired with an increase in overt activism for reproductive justice for all, particularly by young people, from exposing period poverty to fighting for the right to abortion as healthcare and Trans people’s need to access safe care. Examples include activists such as Candice Chirwa, self-proclaimed ‘Minister of Menstruation’ in South Africa, and Indian influencer Diipa Khosla who has collaborated with UNICEF on the Red Dot Campaign. As well as organisations like: The Women’s March, Maternity Action, Bloody Good Period, and The Red Box Project in the UK.

Inevitably, there will be strong push back in America against this draconian move and an artist of the calibre of Paula Rego could help make the realities visible.

Meanwhile my uterus sits, small and snug, back in my pelvis, after the menopause, having worked hard, though still inhabited by a mirena coil to control the adenomyosis symptoms. Invisible and scarred from my reproductive years, it holds the traces of its triumphs, as well as the ghosts of the babies lost. None of that sparked any interest, and I’ve experienced multiple brutalities and injustices along the way. However, a short twitter post in support of abortion, using my own experience immediately generated online hate. I have no shame or regret at deciding to have a termination – it was the right decision at the time and affected not only me but my partner too. My body, my uterus, my decision. I went on to have two children in the same relationship years later, and I hope and expect my children will have access to the same basic healthcare provision in the future if they need it, without any harassment and censure.

Artwork throughout the article is by Laura Godfrey-Isaacs and her daughter Tallulah Haddon.

See below the artwork referenced in this article from Paula Rego’s Abortion Series, 1998. 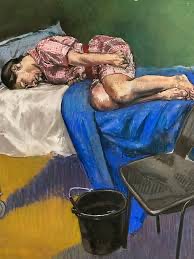 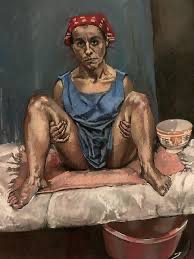 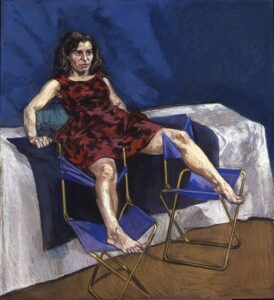 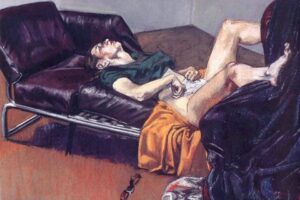 Laura, thank you so much for sharing your story. I recently had a diagnosis of Adenomyosis also which has been very debilitating for quite a long time and I had never heard of it before March this year.
I can relate to your story as I am sure it will resonate with a lot of women. Why is it such taboo and why is there so little interest in learning more about the uterus. There really is still so much unknown. Women know their own bodies best and we must listen to women.