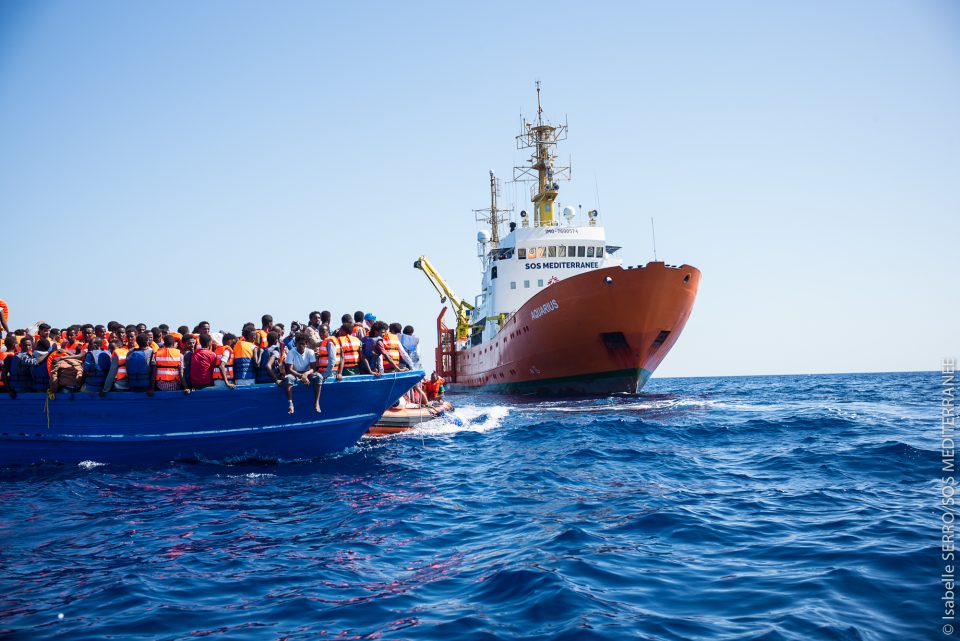 In recent years the European migrant crisis has etched innumerable heart-breaking images on to our collective conscience, non more so than the tragic death of Alan Kurdi, washed ashore on a beach near Bodrum in September 2015.

However among the stories of horror and desperation engendered by the crisis, there are also stories of courage and hope to cling on to. Today we are delighted to bring you such a story courtesy of Médecins Sans Frontières Midwife, Alice Gautreau.

In her own words, Alice describes the miraculous waterbirth of baby Christ this summer.

Around midday on July 11, I was busy in the women’s shelter on the Aquarius when I got the most surprising radio call yet:

I’ve been working on the Aquarius, a search and rescue ship run by SOS Mediterranee and Médecins Sans Frontières (MSF) in the Central Mediterranean, for the past two months. However nothing quite prepared me to hear something like that. The rescued people all spill out stories of violence, torture, kidnappings, rape as soon as they are safe on board of our ship. You never stop being touched by it, but the reality is that after a while, they become quite familiar to you. It is a bit like the birth stories of women back home – but morbid, grim, violent and crueler than you could ever imagine. Each story is the same, and each is different. And after a while, they all seem to merge into one in the minds of the rescue team on board of the Aquarius.

The birth of baby Christ, somewhere in the international waters off the coast of Libya on Tuesday July 11, will stay engraved in the team’s mind forever. Since Aquarius set sail in February 2016, five babies have been born on board, including baby Christ. Uniquely though baby Christ was the only one who’s birth began before arrival on board. And his mother Constance was also the only one who did not have the loving presence of the MSF midwife to support her all the way through the terrifying experience of giving birth at sea.

In fact, Constance was pushed onto a wooden boat on a beach in Libya as she was already having contractions. She finds it difficult to recall when exactly that was, they all do. Indeed, after boarding the boat, come the long hours of waiting. Waiting for the boat to set off away from the Libyan coast into the dark waters of the Mediterranean Sea, waiting and hoping for a rescue ship, waiting for the rescue teams to come and hand out the life jackets, and finally waiting to be taken to safety. In all this waiting they lose track of time.

Constance did all this terrifying waiting while experiencing the excruciating pains of childbirth. She had managed to flee from the detention centre where she was kept prisoner, along with her husband. He had to stay behind as he risked his own life to set her free. When Constance managed to get to the Libyan shore and had an opportunity to escape the Libyan hell, she did not think twice, even if she was already feeling that her baby was on the way. It felt safer for her to be at sea than to stay in Libya, as is the case for nearly all the people we rescue.

Waterbirth is a trendy way to give birth in our side of the world. The benefits are many and it is praised by young mothers, midwives and even increasingly, by doctors. Constance’s waterbirth is not one I would recommend by any means, though. Imagine giving birth in water, water as far as the eye can see, dark and deep. And imagine that instead of the deep and loving voice of your partner, the calm and soothing voice of your midwife, you hear the panicked voices of a hundred strangers, all as terrified as you are to be stuck at sea in a tiny, unseaworthy and overcrowded wooden boat. You are dry, for now, but you hear the clapping of the waves on the hull of the boat and you know that one panic move from the crowd could make it tip over. You know about the deaths at sea. You know people who left and never arrived, however this was still the safest choice – the deep dark sea rather than the Libyan guns. There was no turning back.

When Constance was safe with me, baby Christ avidly drinking from her breast, she told me some more details of her delivery.

“No one helped me. There was a Senegalese man I did not know who held my hand before the baby came. When the baby was finally coming, I caught him myself and wrapped him in a headscarf. I could see the rescue ships already, but they did not come to us for a long time.”

On that day, there were multiple boats surrounding our ship that needed to be rescued. Constance was on a wooden boat, better quality as far as unseaworthy, horrible boats which smugglers use go, so the teams attended to other rubber boats first. By the time they got to Constance, Christ was born. She was the only black woman in a boat filled with more than 100 people.

What followed was the most surreal landing Aquarius had ever seen: Constance, carrying Christ in her arms so as not to pull too much on the cord, was gently pushed up by the rescue team as the team on the deck carefully pulled her.

I was there ready to take her into the safety and privacy of the on-board clinic. Amazingly, both mum and baby were doing fantastically well: the placenta was promptly delivered and baby Christ was given a look over by myself and our doctor before he was called off again to go and assess the medical needs of another boat we were going to rescue.

Constance was soon settled in her little berth, baby Christ on her breast. In Cameroon, where Constance is from, they organise a “see-baby” at the baby’s third month. Friends and family come to see the baby and huge fuss is made over the young mother, with dancing, drums and all-night celebrations. On Aquarius, we had our own little “see-baby”: the crew and the Captain came and raised a glass of pineapple juice to the health of baby Christ and his mother and the Captain delivered the baby’s birth certificate with great fanfare. The ceremony lasted but a few minutes, but Constance was beaming. As the crew quietly retired to allow the young mother to rest, she whispered in my ear: “I am so proud.”

When asked about what happened next to Constance and her baby following their rescue Alice went on to say:

“I know what happened to her because one of the journalists on board kept in touch. She was taken to convent in Brindisi and she seemed super-happy there so I’m glad she went there.

“We got pictures of her and baby Christ and they looked really happy and healthy.”

Editor’s note: Alice will be speaking about this story in more detail at the Scottish Maternity and Midwifery Festival on Tuesday 28 November 2017 in Edinburgh.

Originally from Southern France, Alice trained in Edinburgh as a midwife before heading to London for some clinical experience. After just over three years in London, she started working for Médecins Sans Frontières, first in the Democratic Republic of the Congo and most recently on board of the Aquarius, a search and rescue vessel where she was caring for the rescued women and children.

She is now studying tropical nursing at the London School of Hygiene and Tropical Medicine and is already looking forward to her next mission with MSF.