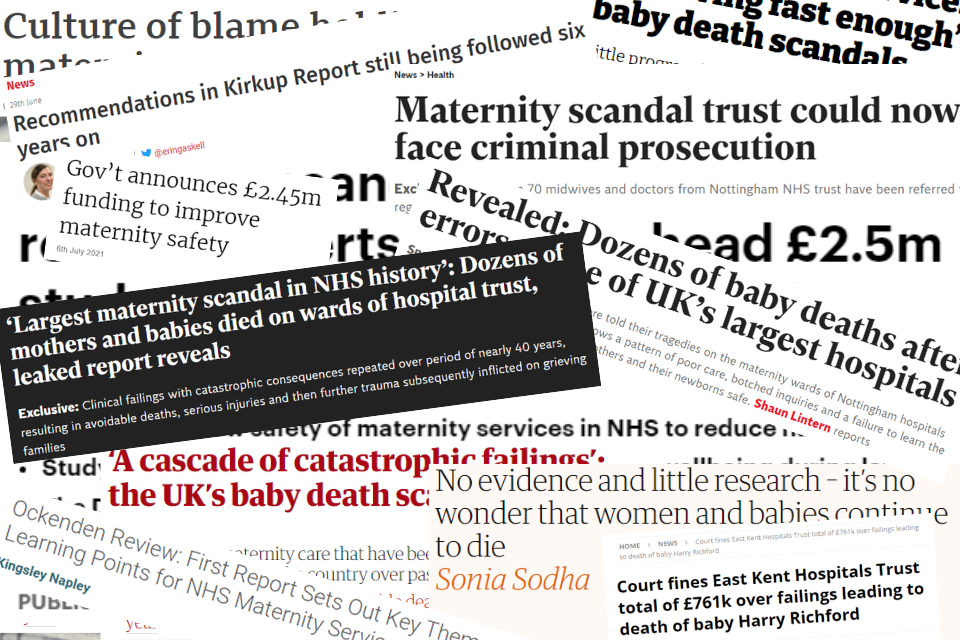 A weekend announcement of £2 million for an RCOG review into preventing brain injuries during birth looks like a smart pre-emptive announcement ahead of today’s publication of the long awaited Select Committee report into Safety in Maternity Services. A few weeks ago NHS England announced £96 million more on maternity services safety training and for extra midwives.

The Select Committee report is expected to be highly critical of maternity services safety procedures but also, if the evidence sessions are indicative, to be highly critical of midwifery leaders and the efforts to ensure women can have a “normal birth”, stigmatising this ambition as an “ideology”. The implication being that midwives delayed escalating to medical intervention or missed signs of danger to the mother or the baby blinded by an ideological commitment to a view on how women should have a “normal birth”.

The RCOG report is to be delivered by the end of the year, which should be timely for the completion of the Ockenden Enquiry. Donna Ockenden’s “interim report” in December 2020, has seen her initial recommendations on reporting incidents now being implemented and these are likely to produce a string of challenging statistics requiring action and keeping the pressure on services.

The Nottingham University Hospitals NHS Trust has been designated “inadequate” for its maternity services by the Care Quality Commission, which just a few weeks ago took a criminal case against East Kent Hospitals Trust whose management were fined £733,000. Not money for the family but a fine. East Kent pleaded guilty, which is also a change in approach. Every NHS Trust management team in the country will have been put on notice. No more kicking negligence cases into the long grass.

The slow gestation of criticism started with the international observation that still births in the UK were at rates worse than in Poland and by comparison there were 1000 more still births than in Sweden. World class had overtaken the UK Services.

But then a series of hammer blows to public and political confidence in Midwifery starting from the Morecambe Bay report on the quality of maternity services, maternal and baby deaths, followed by NMC enquiries into the cases and the damning Kirkup report in March 2015.

Further reports on East Kent Hospital Trusts and Shrewsbury and Telford Hospital Trust, which one journalist describes as “the largest such scandal in NHS history”. Along with Nottingham a series of other maternity services ( 4 in 10) are judged “inadequate” by the CQC and pattern of news reporting starts building.

Figures collected before but published in the midst of other inequalities news in the pandemic revealed that Black women are 5 times more likely (now amended to 4 times) to die in childbirth and Asian women twice as like to die as white women.

A swift response in 2016 to Morecambe Bay from NHS midwifery leaders with Baroness Julia Cumberlege produced a “Better Births” strategy, extra resources and a transformation plan working towards “continuity of carer” (a midwife you know all the way through) aimed to show the way forward, make sure women are listened to and action taken.

But a pattern of news stories and reports was building in parallel and regardless of this work. A stillbirth or neonatal death enquiry reveals a litany of missed opportunities to spot that things were going wrong with mother or child. Monitoring failed or was missing. A mother’s pleas were ignored. A revelation that there were more cases. Uneven provision of high quality neo natal services. A demand for transparency. Freedom of information requests reveal numbers going back 10 or 20 years. The numbers are big. The individual stories are shocking and heart-breaking. The numbers are building, TV joins in. The complaints come in generated by the news stories, not just about still births, neo natal deaths, or maternal deaths but terrible birth trauma and pain for mothers, lack of information or explanation, legal obstacles, slow processes, trusts never admitting problems in case it admits liability. The tyranny of legal process takes over and humanity, trust and sympathy get lost.

Management fear rises. Over half the medical negligence claims and big settlements come from Maternity services, with one award for lifetime care awarded at £37 million for a disabled son after errors at Guys & St Thomas’ Foundation Trust.

This is an important week, every midwife should be paying attention – their Royal College and midwifery voices may need their support. This week can be the start of an informed debate targeting the specifics from the Select Committee evidence sessions on foetal monitoring, brain injury, neo natal services levels, reporting and learning plus ideas for protected conversations with parents and families who just what to know what happened.

Or it can turn into a blame game on midwifery and maternity services, a culture war on “normal birth” and further moves toward the medicalisation of childbirth, and the concentration of maternity services in large units. Let’s hope it’s the first and midwifery can avoid the toxic debate if it strays into the second.