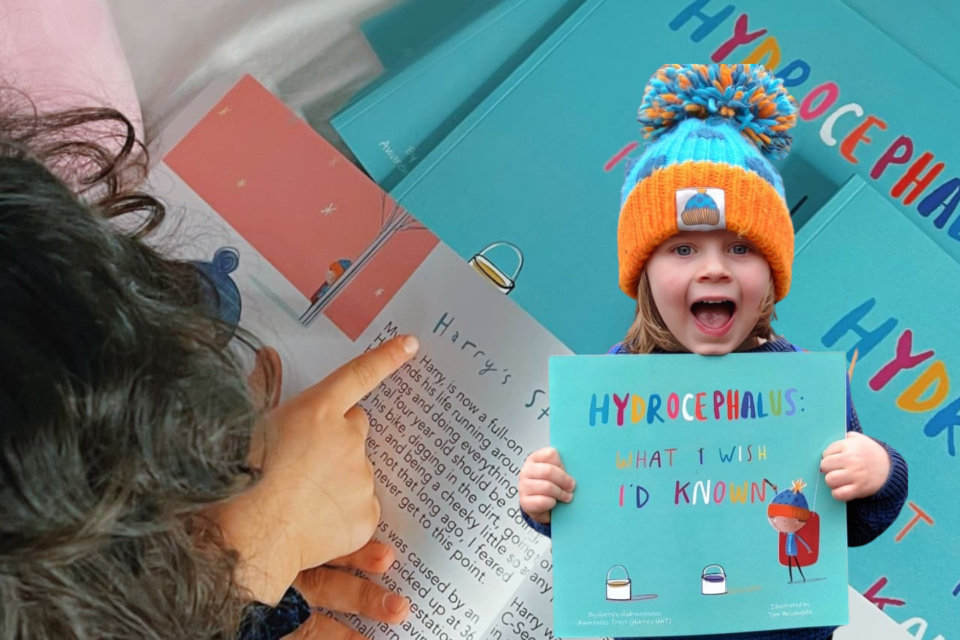 Hydrocephalus is a serious condition which has implications for long-term effects. It needs to be recognised early. In this article Caroline Coates, Founder of Harry’s HAT (Hydrocephalus Awareness Trust), shares her story and guides midwives on the importance of the right care.

Your little boy has hydrocephalus…

What do I want you to take away from story:

Looking at Harry on his way to preschool, brandishing a stick and chasing imaginary zombies, you would never guess that he lives with a life-threatening condition and one for which there is no cure. You would never guess that the first year of Harry’s life was a whirlwind of blue-light emergencies, brain surgeries, and unimaginable fear. You would never imagine that, under his mop of unruly blonde hair is a shunt; a device which drains the fluid from his brain and keeps him alive.

Harry is my fourth child. I had mild gestational diabetes which was controlled by diet but other than an overwhelming feeling that something just ‘didn’t feel right’ the pregnancy was pretty straight forward. As a result of the diabetes I was scanned every four weeks from twenty weeks onwards.

At 36 weeks, my husband and I walked into the scan room. However, about five minutes after the scan started, the sonographer went quiet. She then said she needed to get someone else, so we waited. Another lady came in, said nothing and then, after what felt like forever, she told us that she could see a ‘loss of brain component’. We were both utterly distraught.

We were referred to the fetal medicine unit some forty miles from home. To say we were terrified does not even come close to describing how scared we both were.

After several more scans, it was discovered that our baby had a very large arachnoid cyst.

The medical team decided to wait two weeks, and then deliver our little boy by Caesarean section. We really didn’t know what the future held and, as the medics admitted themselves, neither did they. So, painstakingly, we waited two weeks until the C-section.

When the day finally came, baby Harry defied all expectation. Despite being born in a crowded operating theatre, with a paediatric crash team on standby, he came out pink and screaming. He was checked over and, at just two days old, he had his first of many MRI scans. The MRI showed that Harry’s arachnoid cyst was actually taking up about a quarter of his brain. However, he seemed to be doing well despite all odds and, five days later, we were allowed to go home to begin life with our “miracle baby”.

Harry was monitored carefully. All babies in the UK should have a head circumference measurement taken at birth, and then again at 6/8 weeks, but Harry’s head was measured weekly. It quickly became apparent that his head circumference was jumping exponentially. Harry was also clearly distressed and screamed constantly.

At six weeks old, Harry had another MRI scan. The radiographer came out of the scan saying they could see excess fluid in his brain. The build-up of excess fluid in the brain can be fatal if left untreated and so, at just eight weeks old, we handed our tiny son over to a neurosurgeon for his first brain surgery. It was only at this point that we were told that Harry had hydrocephalus. I had never heard of the condition, so I turned to Google. Then my world stopped turning. 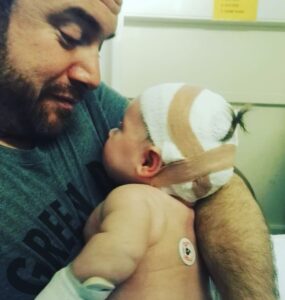 Roughly translated: ‘hydro’, means water and ‘cephalus’ means head. Sometimes known as ‘water on the brain’, hydrocephalus is a condition where excess fluid builds up inside the skull and puts pressure on the brain. It can lead to brain damage and can be fatal if left untreated. Hydrocephalus is more common than you might think, with an estimated 1 in every 770 children developing the condition each year.

We learned that Harry would need a device called a shunt to manage his hydrocephalus, and to keep him alive. Harry’s first shunt was inserted during his first brain surgery and is designed to drain away the excess fluid out of his skull. By doing so, it helps regulate the amount of pressure being put on his brain by the extra fluid his body is producing.

Shunts are great devices, but they aren’t a cure for hydrocephalus, and they can go wrong.  In fact, 50% of shunts will block within the first two years of insertion.  In Harry’s case, it took just three months for his shunt to block. The only way to treat a shunt blockage, which is a life-threatening emergency, is brain surgery. If the blockage is left untreated, the excess fluid will continue to build up in the brain. This can be fatal.

Parenting a child with the condition is hard.  If their shunt blocks, the child needs to be seen by a specialist paediatric neurosurgeon within four hours. There is consequently a huge reliance on emergency services and specialist neurosurgical teams, during a blockage. Additionally, noticing when a shunt is blocked is incredibly difficult. The signs of shunt blockage are sickness, tiredness, grumpiness; which parent doesn’t see those symptoms on a regular basis? We have been known to rush him to A&E only to realise he has a tummy bug. But we can’t afford to take chances.

Harry’s hydrocephalus was found early, and, for this, I will be forever grateful.  Despite having to undergo four brain surgeries in four years, he is doing remarkably well.  He is meeting all of his milestone and is due to start mainstream school soon.  However, we know of many families who are not so lucky. If we had not had scans due to my gestational diabetes, we probably wouldn’t have realised anything was wrong until Harry had been born and his symptoms had become severe. By this time, he may have suffered damage to his brain as a result of his hydrocephalus being left untreated.

Symptoms of the condition in babies include an unusually large head, which can lead to a baby’s head being far too big to fit hats for their age group and / or parents not being able to get the baby’s head through a Babygro (for their age range). 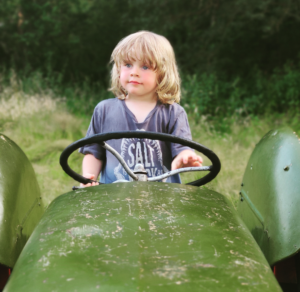 Other symptoms of hydrocephalus include:

The key to early diagnosis is head circumstance measurement. When a child has hydrocephalus, they often have a larger head than normal for their age range, and/or their head circumference measurements cross percentile lines when plotted on a growth chart, over time. Head circumference is therefore a key indicator that something is wrong. It’s vital that the new-born and 6/8 week checks include babies’ head being measured.

The challenge is that many people are unaware of the significance of head measurement. I was, and Harry is my fourth child! We recently conducted a survey Our Research – Harry’s Hat with Bounty, aimed at new parents, which had over 760 respondents. Only 20% of parents were aware that measuring a baby’s head can help identify hydrocephalus. 45% of the parents surveyed did not know that their baby’s head should be measured at birth at all.

Harry’s diagnosis was isolating. He didn’t look ill, so few people really understood the gravity of his condition. We quickly learned that hydrocephalus can be treated but not cured. Harry has had four brain surgeries; however it is not uncommon to hear of children having ten or more surgeries in infancy. We know a wonderful young man called Lucas who is 11 and has hydrocephalus. Lucas has already endured 25 brain surgeries.

I wanted to make life better for all children with the condition including, of course, Harry. We therefore founded Harry’s Hydrocephalus Awareness Trust (Harry’s HAT) to do just that. I’m supported by an amazing team, and together we work tirelessly to raise awareness of hydrocephalus, fund front-line workers so that they can increase their knowledge of the condition and connect families to reduce isolation. Our long-term goal is to make a significant contribution to research so alternative and less invasive treatments can be found.

For families facing a diagnosis of hydrocephalus the future can seem terrifying, isolating, and full of unknowns. In a bid to counter these feelings, the Trustees of Harry’s HAT and I wrote “Hydrocephalus: what I wish I’d known”. The book aims to help families understand more about hydrocephalus in those frightening early days and is filled with stories from parents about how they have managed to walk this difficult path.

Harry’s future is bright: however, the reality is, that it could change. His shunt could block or become infected tonight, resulting in more invasive brain surgery and the risk of brain damage; or, he could go years with no complications. Sometimes, the uncertainty is the hardest part.

To order a copy of the book email us at info@harrys-hat.org 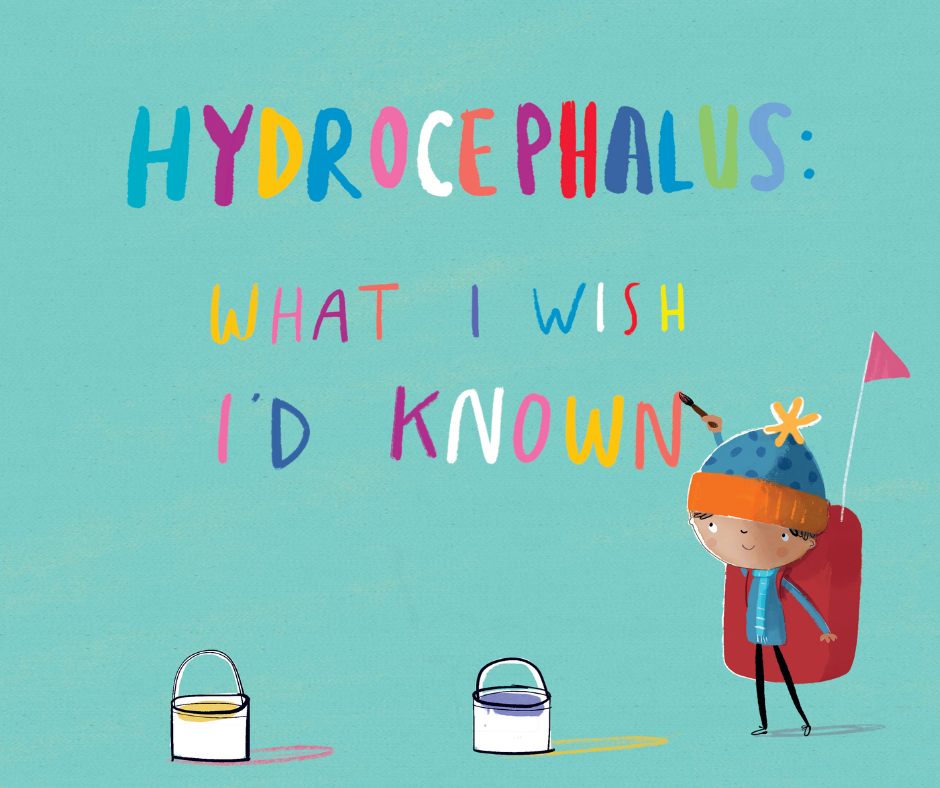 A very simple but indepth information for parents. It helps to allay some of the fears and uncertainties..

A verysimplebut in-depth informatition for Parents and Caters it helps to allay fear, anxiety and some of the uncertainties faced by parents.