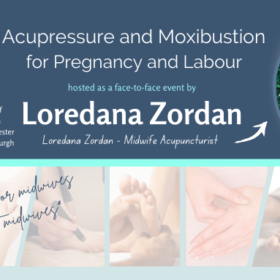 Loredana Zordan, Midwife Acupuncturist discusses Acupressure for Induction of Labour, a topic she will be exploring in detail in a series of four face to face workshops taking place around the UK later this year.

ACUPRESSURE FOR INDUCTION OF LABOUR

Induction of labour is increasing worldwide and acupressure, with its holistic approach to care, offers a potential opportunity to reduce the medicalisation of childbirth. Acupressure allows midwives to provide better care to women, enabling them to experience a safer and a more natural childbirth. Practising acupressure also enables midwives to expand their role, becoming a more complete and independent practitioners.

The essential concept of Chinese medicine is that health is related to the balanced functioning of the body’s motivating energy, known as QI. Qi moves in a smooth and balanced way throughout a series of channels beneath the skin called meridians.
Acupressure is an ancient Chinese technique based on the principle of acupuncture which involves the use of finger pressure (without the needle) on acupuncture points, situated on the meridians.
The Acupressure points stimulate the body’s own energies to help fight illness and restore harmony. (Betts2015)

HOW DOES ACUPRESSURE WORK?

Induction of labour is common as post maturity can pose a risk for pregnant women and the unborn child, increasing the risk of still birth. Acupressure can be used to stimulate contractions, helping to induce labour in cases of post maturity.

The acupressure points commonly used are: Spleen 6, Large Intestine 4, Bladder 32 and Gall Bladder 21.
The stimulation of these points has a very strong effect on the energy of the uterus, increasing uterine activity, encouraging cervical dilatation and promoting a downward expulsion of the foetus, facilitating labour and delivery, releasing endorphins and helping the mother to relax (Yelland 2005).

Ingram et al (2005), in a controlled trial, found that women experiencing a post-dates pregnancy who used acupressure were significantly (17% p= 0.038) more likely to go into labour spontaneously than those who did not. In a systematic review by Mollard et al (2015) The two most studied acupoints were Sanyinjiao/Spleen 6 and Hegu/Large Intestine 4. The result of the study suggests that acupressure may reduce the length of labour, particularly in the first stage.

Further research is required on whether acupressure reduces the need for pharmacological induction and will be beneficial to initiate the onset of labour by stimulating uterine contractions.

Acupressure is a non-invasive technique and can be applied easily by the birthing partner and midwives, thereby promoting the birthing partner’s involvement. It is comfortable and safe, it is not painful and potentially reduces the need for other forms of pharmacological induction. It can increase women’s choice and the chance of achieving a normal childbirth.

Acupressure can increase the chance of a woman progressing through a medical induction with minimal intervention supporting physiological birth.

A Cochrane systematic review (Smith et al 2020 – Acupuncture and Acupressure for induction of labour) reported no known adverse effect to the fetus. However is important that midwives providing acupressure are trained and have knowledge on the point locations and their correct use for their practice to be safe.

The Large intestine 4 and Spleen 6, Bladder 32 Spleen 6, Gall bladder 21, used for induction of labour, should be avoided until 40 weeks. The pressure used to any of these points should not exceed the woman’s comfort level.

CONVENTIONAL METHODS OF INDUCTION OF LABOUR

Prostaglandin E2 is a vaginal gel that is used for induction of labour. It works by softening and facilitating the dilatation of the cervix.

A Cochrane systematic review on the efficacy of prostaglandin concluded that vaginal prostaglandin E2, compared with a placebo or no treatment, facilitates vaginal delivery within 24 hours. Although there was no evidence of a difference between caesarean section rates or the risk of uterine hyper stimulation enhancing the risk of foetal distress. Kelly et al (2007).

Oxytocin is the most common induction agent used worldwide for the induction of labour. Oxytocin is used to strengthen contractions and speed up labour. However, a Cochrane systematic review by Bugg et al (2013) showed that Oxytocin did not reduce the need for caesarean section, neither did it reduce the need for forceps delivery. The review indicated that the use of Syntocin resulted in an increase in uterine hyper stimulation associated with fetal heart changes. 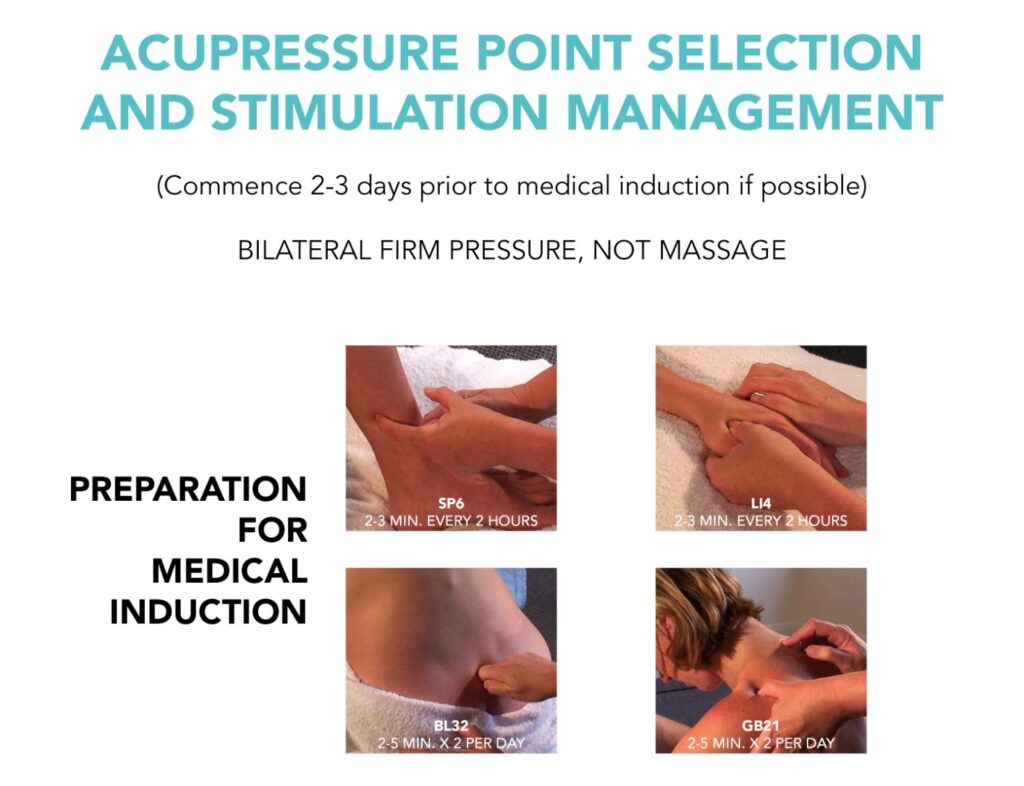 There is worldwide concern about increasing rates of pharmacologically induced labour and operative birth. Many women would like to avoid medical or surgical interventions in childbirth; a desire that may contribute towards the popularity of complementary and alternative medicine/therapies.
Being drug–free and therefore having no harmful teratogenic effects, acupressure provides a much safer and satisfying childbirth experience.

The use of conventional methods of induction – Prostaglandin E2 and Oxytocin – has disempowered women of their capacity to give birth naturally and reduce their choice of alternative and more natural ways of labour onset.

Acupressure can play an important role in actively reducing the level of medical intervention. The use of Syntocinon for labour induction has been linked with an increased use of epidural anaesthetic as contractions are getting too intense not allowing women body to produce their own endorphin to help them cope with the pain of labour .

Acupressure can play an important role in actively reducing the level of medical intervention. The use of Syntocinon for labour induction has been linked with an increased use of epidural anaesthetic as it can cause contractions to become too intense and does not allow women’s bodies to produce their own endorphin to help them cope with the pain of labour.

The use of epidural can lead to a cascade of interventions such as instrumental delivery, increasing the medicalisation of childbirth.

Acupressure for induction of labour is very useful has also been crucial in assisting couples to achieve a more satisfying childbirth experience, empowering them to accomplish a more natural and safe birth experience where they increasingly rely on their capacity rather on medical intervention.

Acupressure and Moxibustion for Pregnancy and Labour

A series of 4, full day, practical workshops for midwives

Find out more and register your place here.